Tragedy can strike without warning nor regard as Eduard Pařízek and the Museum of Metal Models recently discovered the hard way.

The museum located in Týniště nad Orlicí sustained major damages as a result of a short, but powerful, earthquake on June 27 that shook the Czech city.

It’s estimated that Pařízek – who began amassing his collection of 1:43 and 1:64 scale models some 50 years ago – saw roughly a third of his 6,000-car exhibition damaged in the temblor.

Here some more and after shots –

Read more about the incident and Pařízek’s collection here. Aside from your own garage or a museum, there’s probably no safer place for a priceless classic car than a concours event. Not just any old show ‘n’ shine gathering, but a high-end concours d’elegance, where the spectators keep a respectful distance and no one does a burnout to impress everyone as they leave the park.

What could possibly go wrong?

The owner of this 1938 Packard 1605 Super Eight Convertible Sedan found out the hard way. The one of a kind car (literally… there is only ONE of this convertible/hardtop in existence) was parked on a gentle slope at the 2016 Councours D’Elegance at Port Royal Plantation, when it started to roll backwards. Into a pond. The mostly submerged car was too heavy to be pulled out by volunteers. Divers had to be called in to attach cables so the car could be winched out.

Below is a video of the rescue effort.

While the car didn’t appear to be severely damaged, the repair bill must have added up quickly for the million dollar car. Just cleaning the mud and muck out of every little corner will probably cost a pretty penny. Let’s hope the owner had really good insurance coverage!

Staff at UBC’s Museum of Anthropology in Vancouver, B.C. are being credited for their quick action to stop major damage to the museum or to any of the priceless anthology of B.C. First Nations art during a massive flood yesterday.

The cascade that flowed down from the road was quickly stopped at the lobby. In all, 25 people sprang into action thanks in part to a thorough emergency preparedness plan, giant disaster preparedness kits, and a bit of good luck according to exhibition designer Skooker Broome.

“The waterfall was this incredible sight that was not something you should see. It wasn’t Niagara but it felt like it,” said Broome. “If this was 2 in the morning or even 6 o’clock at night without staff the remedial work that we did wouldn’t have happened.” OWING MILLS, Md. —A Buzz Lightyear doll was pivotal in thwarting a string of recent thefts in Atlanta. Mid-Atlantic Clothing Recycling, based out of Maryland, used a GPS transmitter to help solve the thefts of clothes from its collection bins. A company employee placed the transmitter in a stuffed Buzz Lightyear doll in bag containing used clothing items.

GPS tracking is a cool idea, but good insurance and accurate records are safe ideas too. You can easily record and manage your collectibles at hobbydb.com. Read more at wmur.com 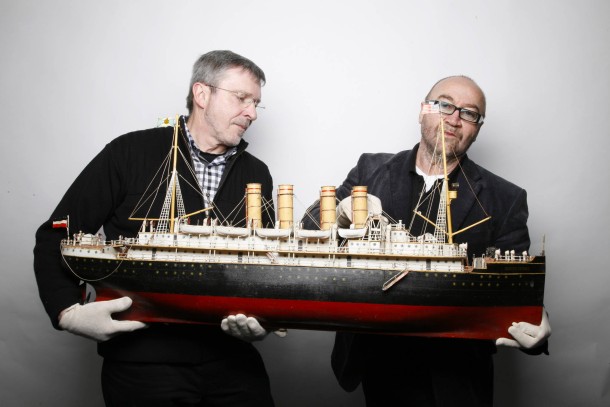 A Dalek stolen from a Somerset tourist site has been found on Glastonbury Tor after thieves said it was “too hot.” The prop, which was at Wookey Hole Caves, near Wells, for a Doctor Who exhibition, was taken more than a week ago. A “ransom note” was then issued.

Cave owner Gerry Cottle made appeals for information. In the early hours of Tuesday, staff recieved a phone call telling them where the Dalek was.

Dobermann Barney was looking after the rare Steiff bear, named Mabel, which had been loaned for an exhibition at Wookey Hole Caves near Wells, Somerset.

The dog ripped the head off the bear and attacked scores of other teddies.

Barney’s owner could only suggest that the bear had a rogue scent on it – or that Barney had become jealous of it.

The bear, made in Germany in 1909, was bought at auction in Memphis, Tennessee, by Somerset aristocrat Sir Benjamin Slade.

On Friday morning we were jolted awake by a CRASH, followed by what I would describe as the sound of a giant rock being thrown through a plate glass window.  But it wasn’t a rock, and our window was untouched.  Our full case of Walt Disney Classics Collection it’s a small world figures collapsed in on itself.  25 figures, SMASHED.

So how did this happen?  A slight miscalculation when putting together an Ikea DETOLF shelf.  One rail was installed backwards and we didn’t catch it.  Three of these shelves are in our house, all put together correctly except this one.  We think we were within the weight limit, which is 13lbs. per shelf.  The problem was that the shelving is able to slip when not installed correctly, and when we placed our newest piece in the cabinet it was enough weight to cause slippage…